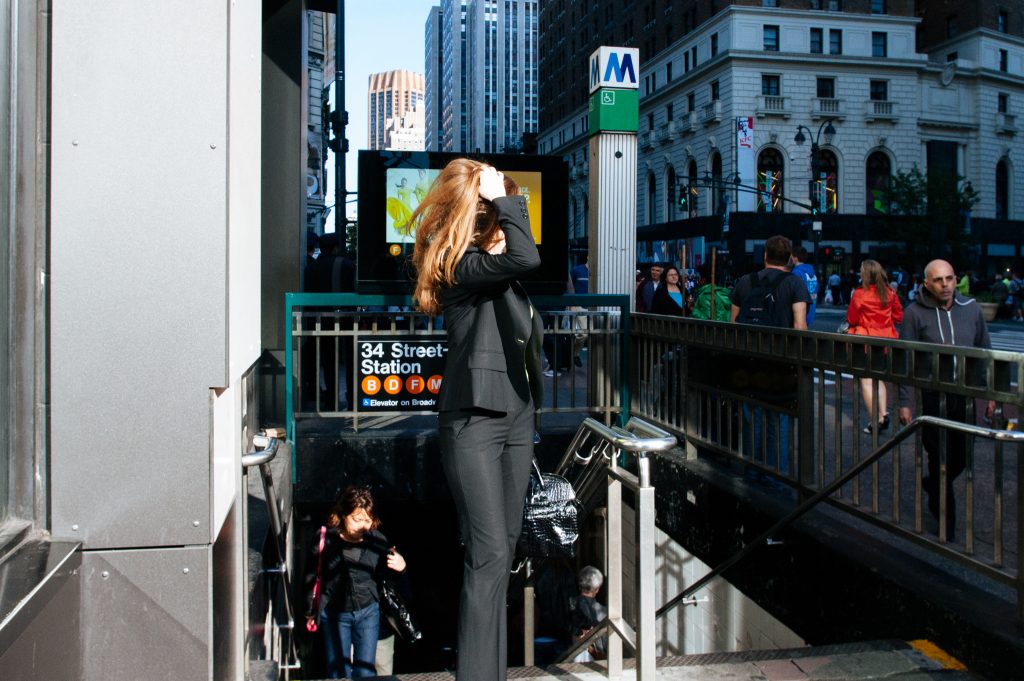 But as with anything photography related, opinions are divided.

A good number of modern street photographers also prefer the wider 28mm, as on the Leica Q and the Ricoh GR. 28mm was the favorite focal length of the the late, great, Garry Winogrand, for example.

Some photographers prefer the slightly longer 40mm, and some go even longer with a ‘normal’ 50mm, which was Henri Cartier-Bresson’s favored focal length.

Of course, there will always be exceptions. Some go as wide as a 24mm-equivalent, and some prefer a much tighter field of view with an 85mm-equivalent. There are no rules – you can shoot street photography with any lens. But the vast majority of street photographers today enjoy shooting the wide to normal focal lengths (28mm – 50mm).

To avoid any confusion, I’d like to make it clear that I’m talking about equivalent focal lengths in the paragraphs above. Given the different sizes of digital camera sensors and their effects on focal length and field of view, it’s much easier to refer to equivalent focal lengths. So, when I refer to the 35mm focal length, that could be a 23 or 24mm lens for Fuji X-mount, Sony APS-C E-mount, Nikon DX lenses (1.5x crop factor), or it could be a 17mm or 17.5mm lens for micro-four-thirds (m43, 2x crop factor) and so on.

The lens used to take all the images in this article is a Pentax 15mm lens for APS-C, so given the 1.5x crop factor of Pentax APS-C it’s roughly equivalent to a 22.5mm lens on full frame. Of course, there isn’t really a 22.5mm lens for the “full frame” 35mm format, so most people generally think of it as a 21mm ultra-wide lens.

Other ~21mm FOV prime lenses on other systems would be the likes of the excellent Fujinon 14mm f/2.8 for X-mount. The closest for micro four thirds would be a pair of 24mm-equivalent primes: the Panasonic 12mm f/1.4 and the Olympus 12mm f/2. The 21mm conversion lens for the Ricoh GR also provides a similar field of view. 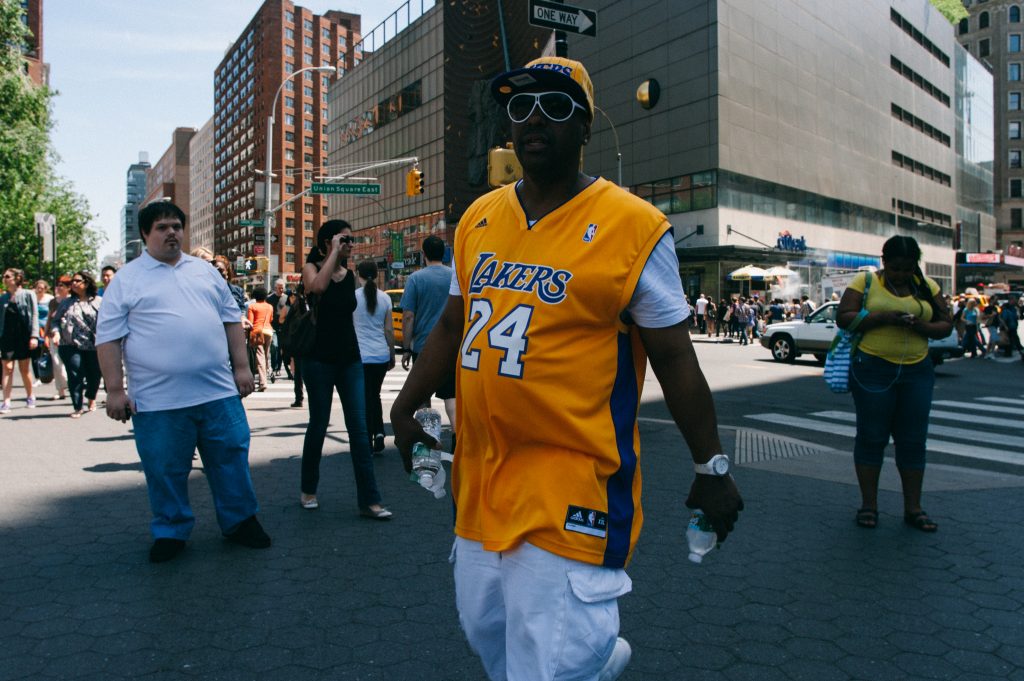 Shooting with an ultra-wide angle for street photography

The biggest challenge when shooting with a wide angle or an ultra-wide angle lens is that you need to get close to your subject. For beginners, this is the biggest hurdle. Photographing strangers is hard enough, shooting from 3 or 5 feet away is even harder.

If you shoot from farther away with an ultra-wide angle lens, your images will lack drama (most of the time). It won’t have that oomph that a wide angle field of view can provide. Your subjects will look tiny, and your images will have a tendency to look boring.

To take full advantage of a wide angle, you need to get close. This is how you provide the intimacy and drama that wide angles are known for. 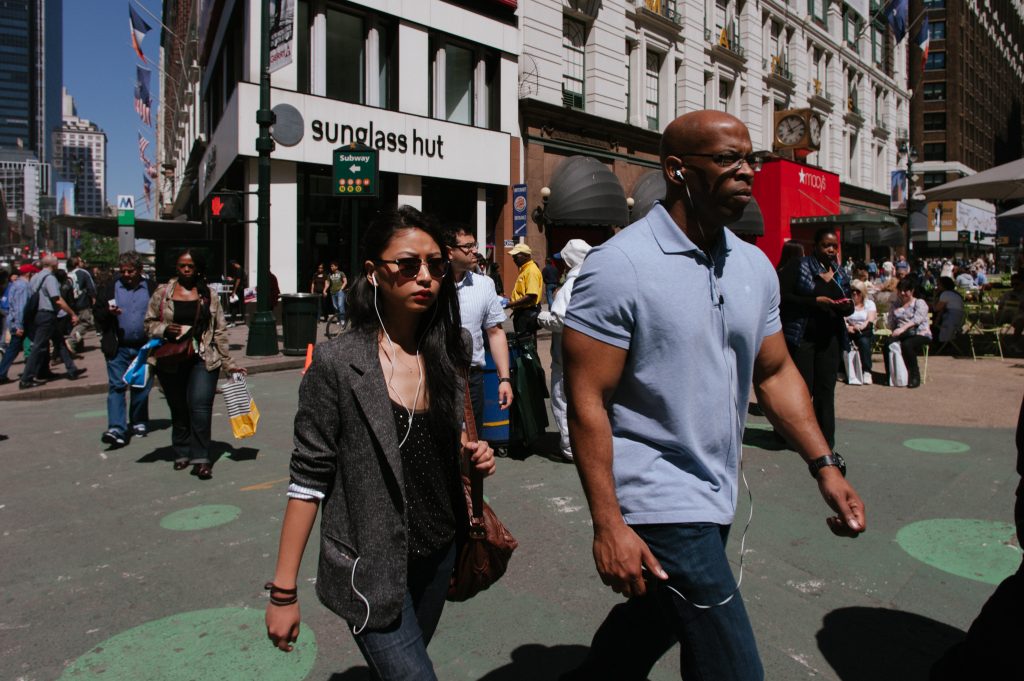 You have to pay extra attention to the edges of your frame, to avoid unwanted elements.

Most wide angle lenses, especially an ultra-wide, will force you to get closer in the streets. Now, not everyone likes this in-your-face approach, but I think it’s at least good for practice. I think any aspiring street photographer should try it once or twice.

Plus, working close will help you get over your fear of shooting strangers.

Even when you’re already comfortable shooting out in the streets with, say, a 35mm or a 50mm, it’s always good to mix things up once in awhile and put a wider lens on your camera. 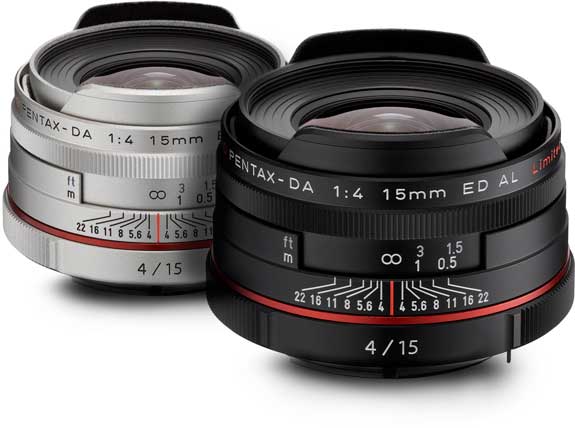 A sexy little lens! Look at that engraved distance scale and depth of field scale! At the top, you can see the ‘petals’ of the telescoping lens hood (it is in its down position in this image).

This isn’t going to be a full review of the Pentax HD DA 15mm f/4 Limited lens, just a few of my thoughts while using it for street photography.

You can use it on the Pentax K1 (or K1 Mark II) if you really want to, but it will only crop the sensor to APS-C mode. That means you’re throwing away a lot of pixels, and you’re not really taking advantage of the full frame sensor. If you want a similar ultra wide that’s designed for full-frame, you need to take a look at the old Pentax FA 20mm f/2.8 lens, or the newer Pentax D-FA 15-30mm zoom lens. 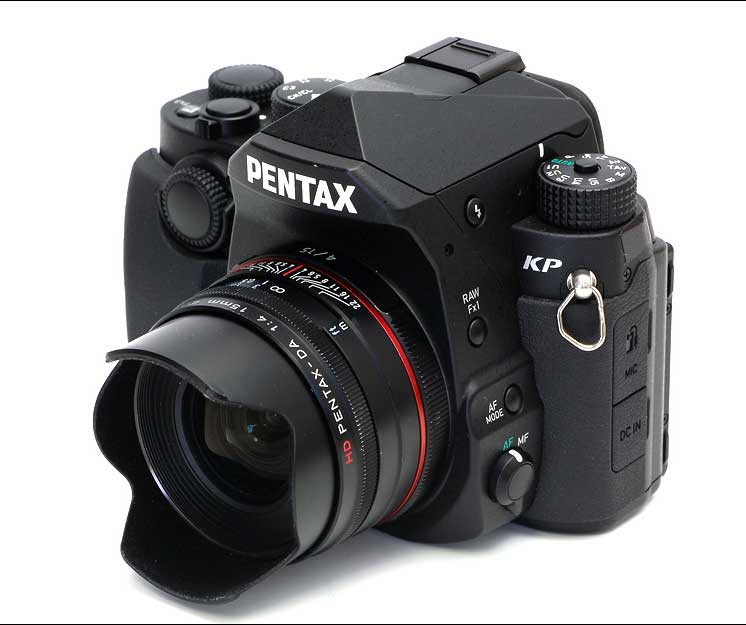 Pentax makes some of the smallest DSLR’s and lenses. Here you can see the telescoping hood in its out position.

The best things about this lens 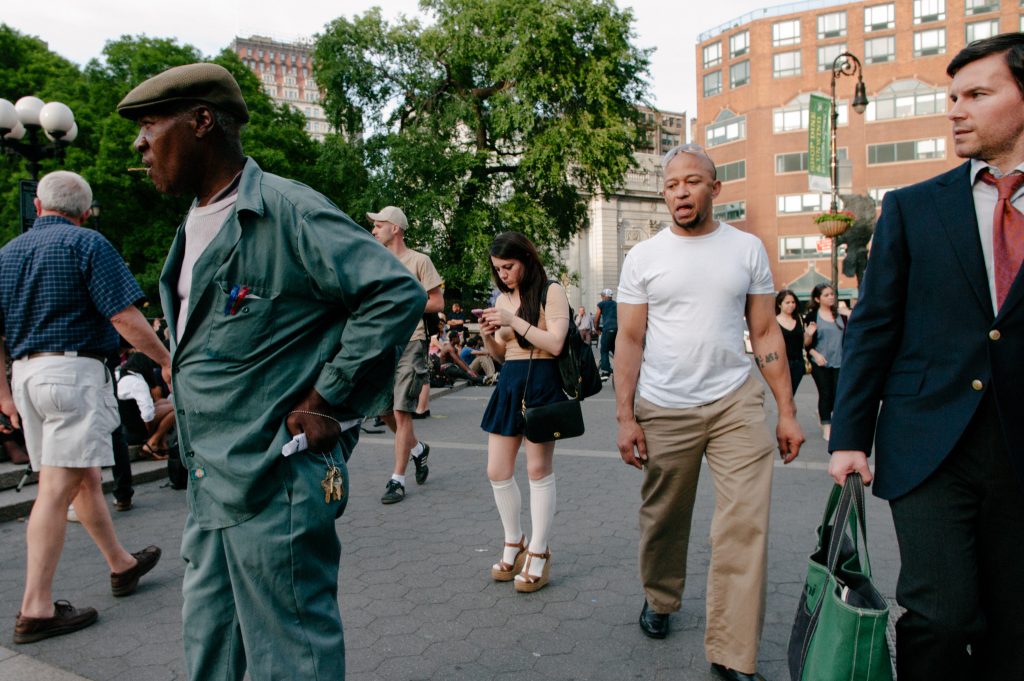 Shooting with a wide lens allows you to show different layers in a single scene.

Should you buy the Pentax DA15?

On paper, it doesn’t look very sexy. It’s “only f/4”, it’s not an everyday focal length, it’s not really great for serious landscapes.

But on the flip side, it’s tiny, it’s really fun to use, and it offers a great perspective for street shooting.

It’ll also work well as a trinity set-up with the longer Limited primes – the DA 70mm and FA 77mm. If I were doing a Pentax Limited prime trinity, I’d probably do something like DA15/FA31/DA70. That’s a tiny, high quality trinity kit right there.

The DA15 can also pair well with any of the cheaper Pentax plastic fantastics – the Pentax DA 35mm f/2.4 and Pentax DA 50mm f/1.8. That’s also a great trinity right there. Relatively cheap, ultra-light (lighter than some mirrorless set-ups), a nice budget trinity set-up that won’t take up a lot of space in the bag…

It’s a great addition to any Pentaxian who wants to keep their kit small and light. 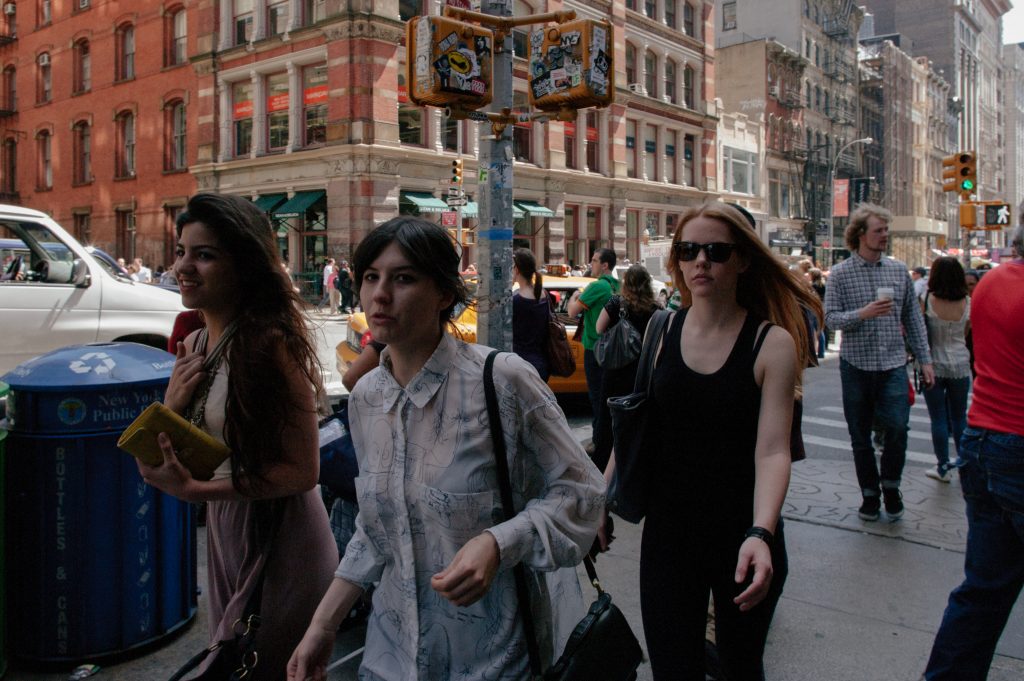 Yeah, it’s not great for low light street shooting, because you usually want higher shutter speeds (at least 1/200) when doing some street photography. But it’s not that bad.

You can still use it in low light with slower shutter speeds, since all Pentax DSLR’s have in body image stabilization (shake reduction).

The f/4 doesn’t really matter in most everyday street shooting (in good light), since you’ll want to be working at f/8 or so anyways.

The on-lens distance scale and metal build are already worth the asking price in my opinion. Having the ability to quickly change and check the focus distance with just a glance just makes street shooting a hell of a lot more fun.

With its wide focal length, it’s not an everyday lens, but it challenges you to look at the world differently.

The reason most ultra-wides aren’t popular with street shooters is that it’s easy to make an image about what the lens is doing (distortion etc..), rather than about the image itself. But this lens isn’t so wide that it becomes a distraction.

It won’t be the only lens I own, but I have gone out many times with just this lens. Limiting yourself to a single lens, a single prime, especially with a focal length that isn’t your typical walk around focal length is always fun.

It allows you to grow as a photographer, and it helps keep things interesting. 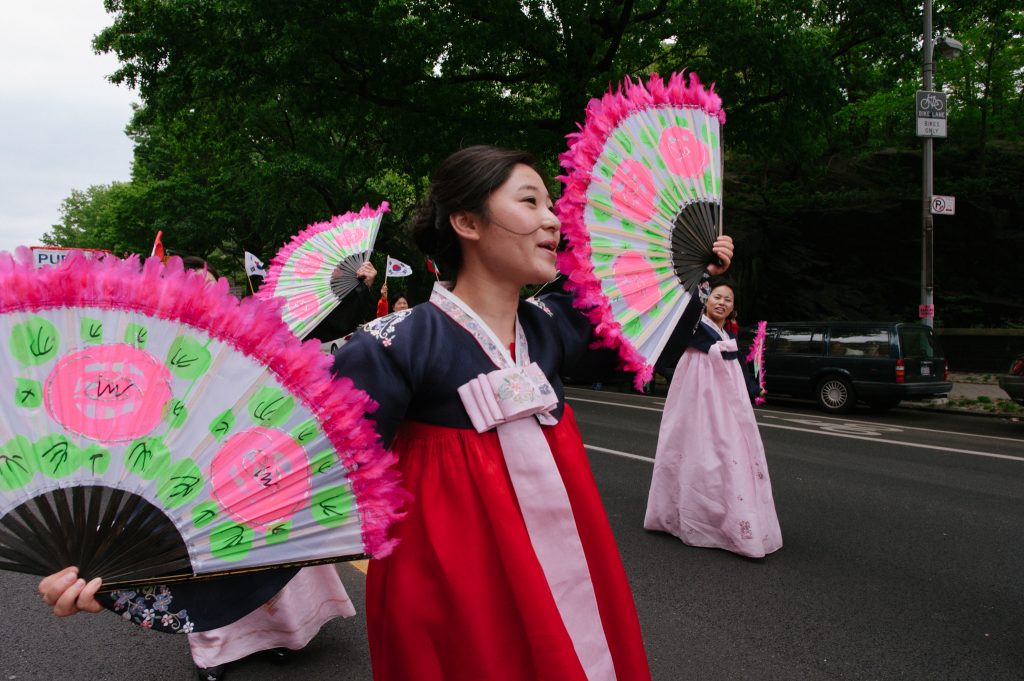 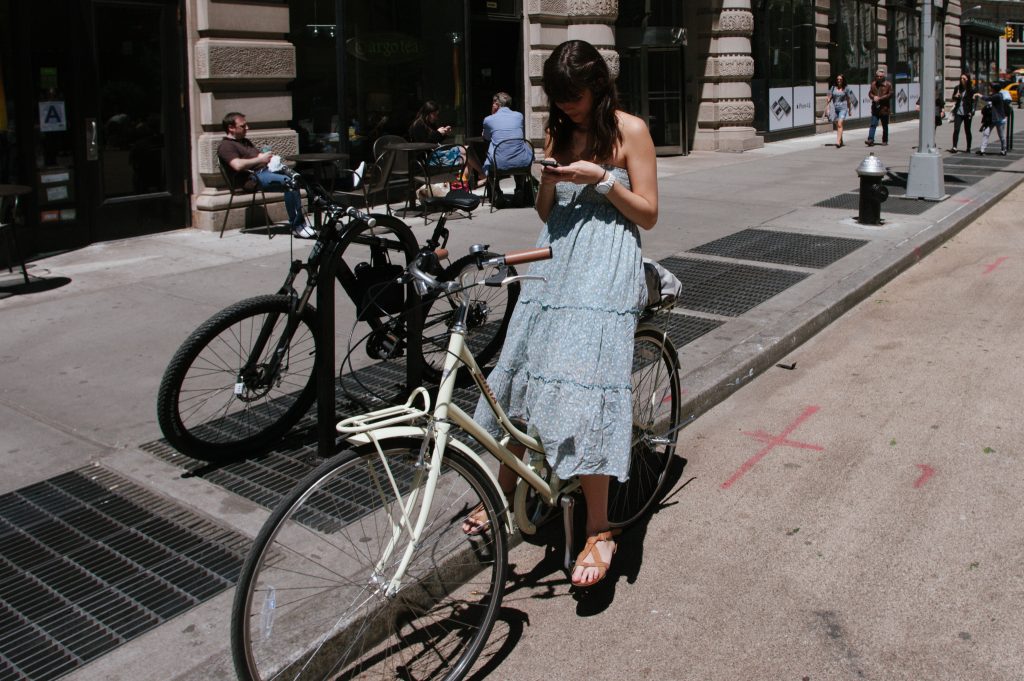 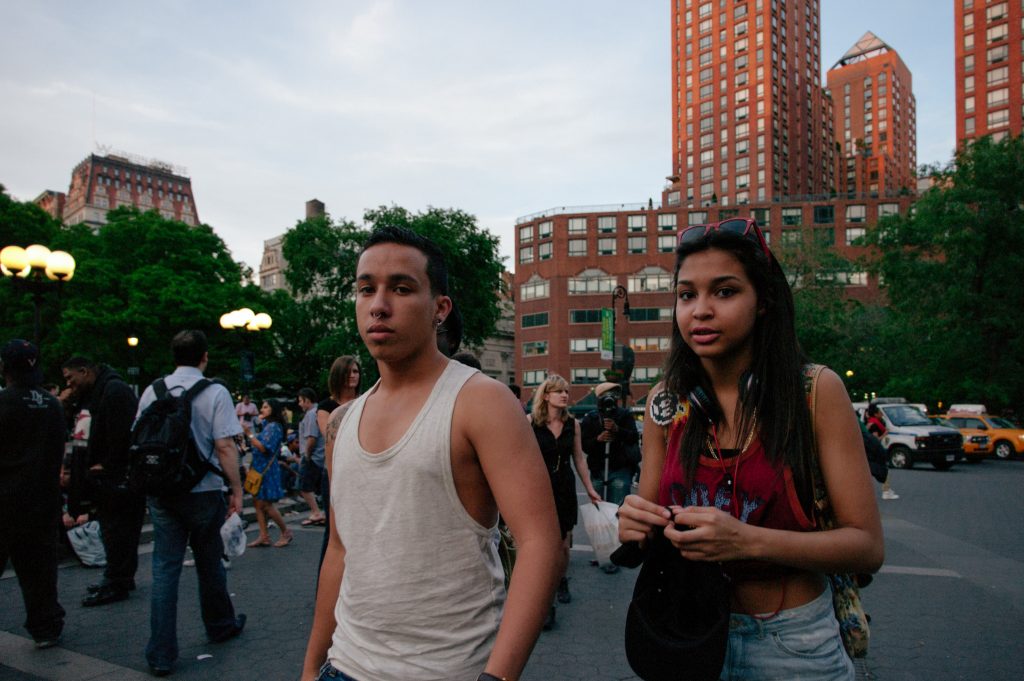