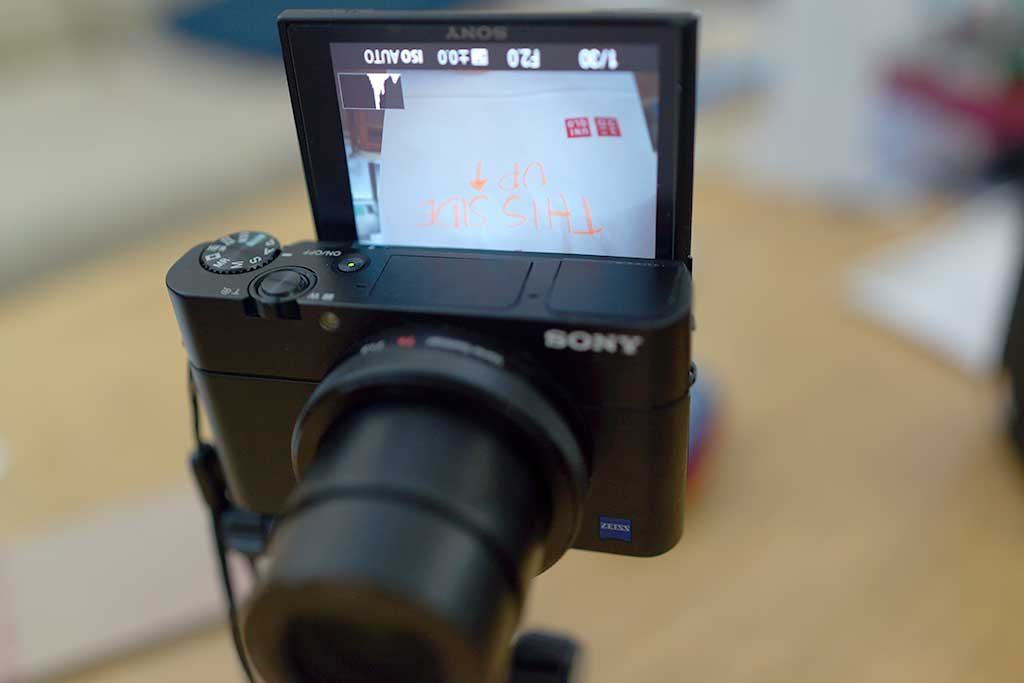 Even when sitting flush against the body, the LCD display no longer reverses in selfie or vlog mode. 🙁

So, I recently dropped my RX100 V. From about five feet, straight into concrete. This thing is one slippery beast. Adding a wrist strap or a grip on this thing really helps.

Click here to check out the best accessories for the RX100 V. (Including the best wrist strap and grip)

Fortunately, the camera was not on at that time, so the lens was retracted. My RX100 V now has a battle scar: A decently sized dent on the bottom left corner of the LCD. 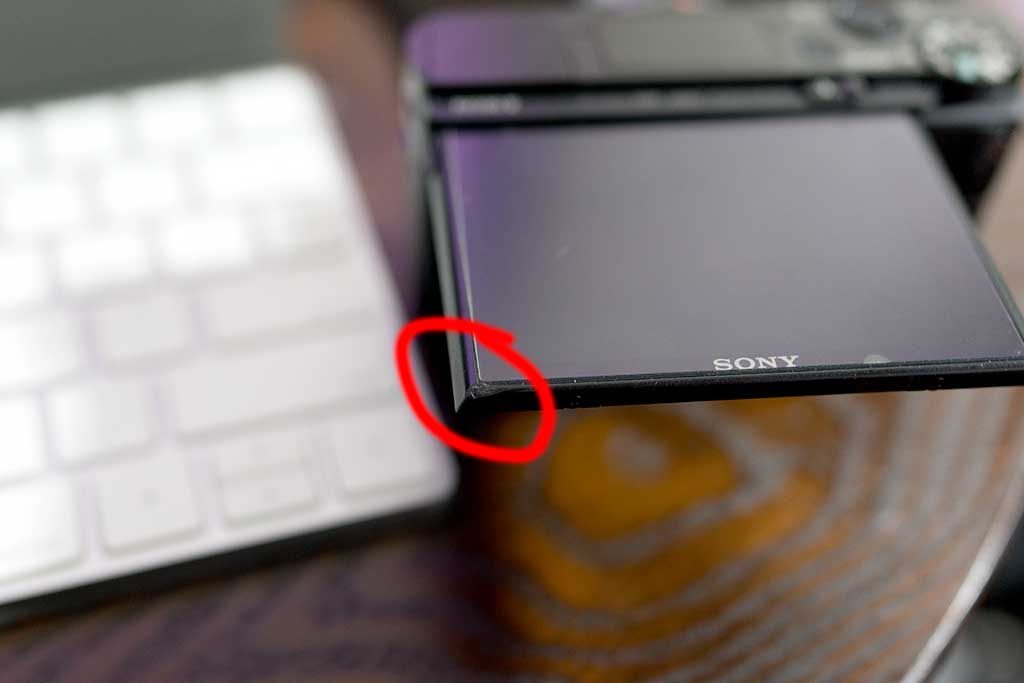 The good news is that almost everything seems to be working perfectly so far – the lens is still perfect; there are no focus issues; everything works like it should. The only problem is that the LCD image no longer flips when the screen is flipped up – i.e. when the LCD is in “selfie” or “vlogging” mode.

Basically, this means that the orientation sensor inside the screen or the camera has been dislodged or disconnected, such that when you flip the LCD up, the camera no longer senses this and therefore does not reverse the image as it should. So if you’re in selfie mode, the image displayed is basically upside down.

I’ve done a complete reset of the camera to default factory settings, and I’ve also alternated between slowly inching the LCD up to the body or flipping it up as fast as possible just to see if that makes a difference, but it’s a no go. Even with the screen completely flush against the camera body, the image is still upside down.

I’ve done some research, and it appears that the LCD orientation is controlled by a magnet sensor of some sort, either on the LCD itself or on the body of the camera. Some have reported success with moving a fridge magnet around the LCD or the back of the camera.

I’ve tried sticking a fridge magnet in various areas around my camera, but unfortunately it did not work for me. If you’re having the same problem, it’s worth a try though. 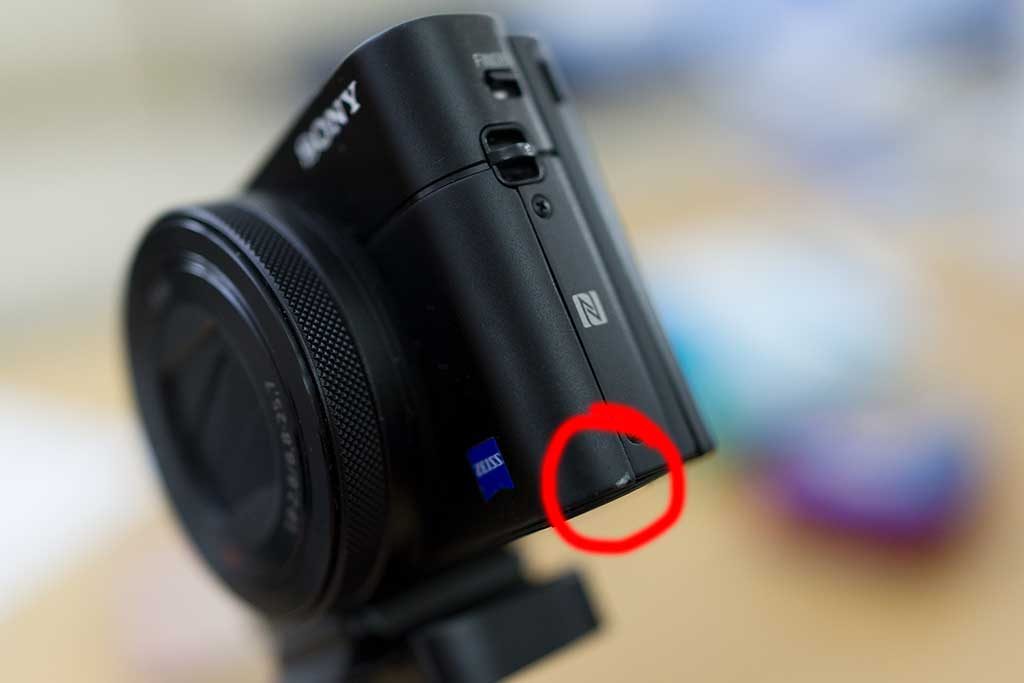 There’s a smaller battle scar on the front of the camera.

Others recommend opening the LCD screen, and checking if anything appears dislodged or if anything was disconnected. It may just be a lose wire or something.

Right now, I haven’t done that yet, since I’m traveling and don’t have the necessary tools handy. But I’m not so sure it’s something I want to do either. I’m not sure I want to risk further damage just to fix something that I only use about 10 percent of the time anyway.

For now, I’ve resorted to using the Sony Play Memories App when I need to use the camera in selfie mode. It’s more tedious than just flipping the LCD up, but in some ways it actually works better than just flipping up the screen.

Right now, my wife and I are on vacation, and we’re often in places where it isn’t ideal to get someone to take our picture. Plus, she’s a perfectionist and isn’t always satisfied with the first shot. 😉

When I first got the camera, my wife and I would just take selfies the “normal” way. i.e. Flip the LCD up, and hit the shutter. Most of the time, this results in an image that’s 95% our faces, and just a hint of the background. Not really great. It’s useful for “recording” memories, but it isn’t ideal. I mean I could lug around a tripod, and we could try shooting proper self-portraits via remote shutter, and they’re probably going to turn out great, but first, you have to to lug around a tripod… Not something I want to do.

But what if you want more of the background in your shots – the best solution is to use a selfie stick and shoot at the RX100 V’s widest setting. That’s roughly 24mm-equivalent. Not ultra-wide, but wide enough especially if paired with a normal selfie stick. Now, I don’t actually own a real selfie stick, or even a monopod, but I do carry around a Joby gorillapod, which works almost as well.

The problem with trying to take selfies with a Gorillapod or any selfie stick for that matter, is focusing. Shooting selfies means that the camera focuses before you take the shot – that is, it focuses at the time you hit the shutter to start the self-timer. With the camera mounted on a stick, this almost always mean your focus is going to be off, unless you get someone to trip the shutter while you’re holding the camera at arms length. If that’s the case, might as well get them to take the picture right?

But ever since we started having problems with the LCD, we decided to use one of the Sony Play Memories App (Smart Remote Control) to connect a smart phone to the RX100 V. You install the app on your smartphone, then the app connects the camera and your phone via WiFi and provides a nice live view of what the camera sees.

Since the magnet fix didn’t work, we resorted to using the RX100 V on a monopod/selfie stick and using the Sony Smart Remote Control App.
It’s an extra step to connect to the camera, but with touch to focus and with the camera farther away, it’s resulted in significantly better selfie images!

But the best thing about using the app is that it gives you touch focus, which solves one of the biggest problems with selfies – you’re able to control where the camera focuses by simply touching the screen on your smart phone.

The app also gives you full control over exposure parameters – set shutter speed, aperture and ISO and even adjust exposure compensation. You can even control the zoom.

Other things you can set on the app are white balance, focus mode (AF, MF, DMF), continuous shooting settings (on/off or single shots) and set the self-timer (off, 2 secs or 10 secs).

There’s also an option to set the live view to “mirror mode” – useful when you’re filming yourself talking to the camera.

The second best thing about the app is that it also automatically save images to your phone, for easy sharing. You get the option of sending a full-sized JPEG, or smaller sized ones for easier sharing over slower cellular data (2MB image).

The app also works in video mode. You can’t switch between video and photo mode on the app – BUT, if you physically switch from photo to video on your camera while connected to your phone, the app will automatically switch modes as well.

Sure, the added hassle of having to connect the camera to your phone is not as easy as simply holding the camera at arms length – but I think it’s a minor inconvenience considering that you’ll be able to get a wider field of view and a perfectly focused shot by having the camera mounted on a selfie stick.

It also works great if you’re a one-man band trying to film yourself, or for group shots while the camera is mounted on a tripod.

Don’t forget to check out our real world review of the Sony RX100 V!